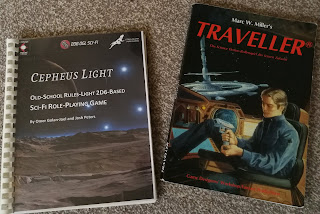 Cepheus Light - a short review
My #RPGaMonth for November is again something old and something new, namely Classical Traveller and Cepheus Light, which is a rule reduced version of Mongoose’s OGL Traveller 1. I have read both [1] and am going to compare it to.


Traveller is a game which exist in many different variant, but Cepheus Light still uses the old 2d6 skill rolls. That is to succeed you need to get 8+ on two d6, but your skill level is subtracted from number, you have to roll. Pilot-2 will get the value to 6+. As always there a situational modifiers and so forth. Attribute modifiers like in Moongoose’s version have no effect on skill rolls.

The game uses six attributes: Strength, Dexterity, Endurance, Intelligence, Education and Social Standing, so there is not charisma attribute for a sparkling personality or general attractiveness. There aren’t any advantages or disadvantages or perks or something similar. A character is complete by her/his attributes, skill levels and equipm…
Mehr anzeigen
Weitere Posts